You could have heard the corn go pap pap ka-ka-ka in the searing heat of a West Nile January. By the time we soaked in at the waters of Miriadua falls, the damage had been done. Kicking off as late as 11.30 meant that we could do very little to steer clear of the afternoon heat. But that’s as far as the misery goes.

A morning breakfast of the very best vegetable samosas west of the Indian subcontinent had us fueled for what we had feared would be a very short hike. Plans for an afternoon soak in the river were already being hatched.

The opening section was a mundane murram road starting from a school but nobody spoke out because rural schools are a normal thing. Then came a bridge over the river and still nobody spoke out because, you know, done-this-done-that. Then more murram road for all of 30 minutes. This was time well spent discussing which directions Congo and Sudan are, debating whether this might be Uganda’s tallest tribe, Pablo singing that monotonous number of his, et cetera. The mood was generally pregnant with expectation. And then the trail broke off into the wilderness.

Next came the gardens but still no body spoke out because these too were a usual sight back home. By the time we cracked through the first thorn bush, there were so many voices with pent up anger eager to speak out against this most unusual experience. You could tell from the winces and grimaces that this choir needed a conductor. Those that were in it for the battle scars got their money’s worth, while a few others who were not sure which emotions were appropriate to display on a hiking trail simply kept their views to themselves. This theme would continue in sporadic intervals all the way to the summit and back but Wati remained indifferent to our unsolicited opinions.

Along the way to the top, we came across a grave containing the remains of Dridibu. The last time we made attempts at cracking the place of this figure in the origins of the Lugbara people, we opened a can of worms. No one is in the mood to try again.

We scraped through farmland, homesteads, tiny bushy paths hanging onto the rock for dear life, steep hills and valleys; this place had it all. We were so accosted by hunger pangs that we pretended not to notice the little army of kids following us like those hyenas hot on Simba’s tail hoping we would drop the tin of gorillos. We were lucky to have a lot of tree canopy cover for the sun was unrelenting. At this point, the poll for the most useless question in the world returned results in the following order:

Precious, Rehema and Ahmed propped up the rear bringing in the last with them through what looked like unexpected pain. Fay, who only came to this hike to find inspiration for her travel blog, did not show many signs of being fazed by the whole experience as she could be seen turning on the style with a string of selfies at the summit. Pablo could barely sing a word of his now famous song by the time he broke through the last of the tree line to the summit. Of the group joining us for the first time, one man stood proudest: the unbreakable FX. Like the true champ he is, he slept out in the open next to the bon fire and set up his tent at day break. He had a breakfast of beer and a snack called tea. For hydration, he relied on a sachet of Bond 7 saving the water for cooling his face in the unforgiving the heat. One could have thought he was on the campaign trail as he took time to hold court with every group of villagers he came across. His people skills paid off handsomely when he expropriated a local brew from his very obliging audience and duly passed it on to the visitors from Kampala for a taste of the local single malt. The ingredients, however, are a subject of someburry’s patent and as such cannot be shared here.

The summit of Mt. Wati (a series of big hills to call a spade a spade) itself was well worth the effort presenting views as far as the eye could see and a little reminiscent of what we saw in Kagulu at the beginning of last season. Blessed with rock interspersed with brown tussocks, the flat head makes for very a beautiful photo backdrop if one can time it to avoid the overhead sun. It was impossible to miss the cheer on everyone’s face upon getting up this far.

But what goes up must come down. It must have been an hour or two before we decided it was time to descend. Cue the treacherous rock. Forget the thorn bushes, making our way down steep smooth rock turned out to be a job better suited to the hind quarters than the hitherto trusted hiking boots. It was such a relief then to see that nobody tumbled over. This wasn’t the time to sing Jack and Jill. 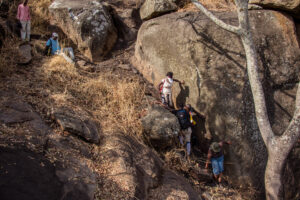 There was little trouble getting out after that. Only a patient wait for the last group to return to the pick up point. Time check: 6pm.

Wati, in the end, surprised us all. For starters, the hike is more of a series of big hills rather than the mountain we are used to. But that much we suspected before signing up for the trip. If you want to see the splendor of Miriadua Falls, time the wet season when the water levels are much higher. Gerard Iga has been the best fixer we have hiked with since we started this journey. Only Steven Waswa from Kakungulu Safaris can claim to be his equal. Despite the sound of his name, he is a son of the soil and knows the area like the back of his hand.

Interesting read. Keep it up

Mountain Slayers Uganda is a volunteer-based club that offers affordable adventures that encourage Ugandans to explore the outdoors and our country.